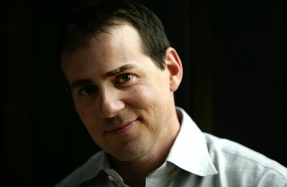 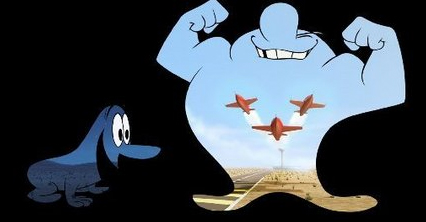 TEDDY:  How did I come up with it?  Well, I have a knack for seeing shapes in negative spaces.  A lot of times I’ll be doing paper cutouts, which is something I’ve done commonly on films like The Incredibles, and I’m always looking for just interesting shapes.  And in one case one day I was just drawing like a keyhole and I just put eyeballs on a keyhole and I thought oh this will be funny just as a gag.  Really I was having the eyes in the keyhole look into itself and you could see what it was seeing inside of a room.  The benefit of this, by making it a character, the keyhole could kind of move around the room and kind of reveal things, unlike in an old movie when they had somebody looking through a keyhole there’s only one thing they could look at.  But in this case this keyhole could kind of see everything he wanted to see.  So that was basically the inspiration to it.  I’m just drawing jokes and I had like just pile of gags that I was left with and then I had to kind of make sense of that from there.  But this was even before I presented it.  I was just playing around.

TEDDY:  I guess you could, but I wanted it in 3D deliberately because of this effect.  I always like the way flat titles looked in 3D for some reason.  They look more 3D than the 3D movie.  I’m not sure if that’s the contrast of 2D and dimension just seems to have it pop out more.  So I wanted to play with something with this idea.  Actually, Knick Knack, the one they made here, that was 3D and they showed it to me.  Actually within two minutes I got a headache watching it, but the iris out at the end, they do an iris and I said that’s great, freeze that frame.  I want to see that freeze frame of the iris because that was the look of our movie when we saw it just in the middle because it’s just like looking through a punched hole basically.  There’s something more effective with the 3D that way I think.

Q: How hard is to develop a story like this?

TEDDY:  Like I said, I was merely playing at the time, and I thought what can I do to make this kind of interesting, and something about having a single horizon and having two characters just on daytime and nighttime together on the same horizon I thought was just kind of a funny thing.  And I just had the guys boxing, that was all I did, I just had them fighting.  That was my drawings, and I would put things in them that would contrast their aggressive behavior, like hot air balloons quietly floating by.  When I showed John these ideas, he was like, “Oh that’s interesting, but you should have them be more curious about what’s inside, have them really recognize.”  And I thought okay, so I started playing around with this in my next pass and that became what the whole movie suddenly became about, and I thought this is interesting because a lot of times when people are fighting they’re fighting because they are different.  I don’t understand you so they get into a fight.  But the idea of wanting to investigate made the story become what it was and then I started to understand that yeah, it’s the fear of the unknown and how people don’t want to investigate new things.  I don’t know.

Q:  How do you show this short movie together with Toy Story?

Q:  Yeah, somebody came with an idea and said yeah, maybe I can do it?

TEDDY:  Yeah, in this case they had asked me.  There was a producer here named Kevin [inaudible 5:36] and he had said you should think of something for a short film.  I had pitched ideas in the past and they always had the same reaction like yeah, that’s funny, but we could never make that; and that usually was the way it went, and so I didn’t want to pitch anymore ideas.  He kept bothering me, almost like I owed him money, and I eventually caved in and thought well, I have this one idea that I was thinking of.  They like you to bring in three ideas when you do these pitches.  So, I brought in, Day and Night was the first one, and when I had shown it I didn’t even complete the whole pitch, he said yeah, let’s do it, we’re going to do this one, and then I just merely had to, as a formality, go through the rest of the presentation.  People who were taking notes, it was like this girl’s first day at work, she’s like is that normal?  I’ve never seen anything like that.  I said no, it’s not normal, I’ve never seen them pick something right in the middle.  It was better, I think, to pitch something that just had a few drawings really, and a concept and maybe sort of a perspective instead of a completed thing.  I think John likes to participate a lot with you developing an idea, that’s why I think.

Q:  Does he always have the last word?  John?

TEDDY:  Yeah, he’s the boss, but actually I was very free to do whatever I wanted in the story.  I did make up all the ideas in the story, but if something didn’t work, like it was just unclear or it appeared in the wrong tone or something, he would make note of that and he wouldn’t tell you exactly what to do all the time, but it would be more or less, that transition doesn’t work, you should think of something more economical that gets us from A to B.  So that would then be my job to figure out well, what is that?  If these two pieces work, where do I go?  So that’s kind of how we do it.  That’s not unlike a feature though.

Q:  Was 3D part of the initial pitch?

TEDDY:  It was.  I pitched it in 3D actually.  You could look at the thing with glasses.  It was a walk cycle I created of characters walking along a photographed background and a technician here helped me put it together in such a way you could look at it with glasses.  That was great.  That’s when I really knew I think this would work because I knew it looked good as a drawing, but I had no idea if it would be readable whatsoever once you started moving, because there really had to be a certain amount of control to how many things were in the background or how little or how much they moved because there was always like four things to look at.  You had to look at Day’s face, you had to look at Night’s face, you had to look at what’s inside of the body and look inside the other body, and your eyes kind of trading around.  Even though the film is kind of slowly paced really, I feel like your eye is doing a lot more work than even the characters are doing in the picture because there’s just too many things to pay attention to.

Q:  Right now, what are you working on?

TEDDY:  What am I working on now?  I’m not doing anything, just doing these sorts of things right now, just free agent right now, yeah.

Q:  You’re not on another project?

TEDDY:  I do pop in on some projects but I’m not a regular.  Actually, I’m almost never a regular honestly, as long as I’ve been here.  I’ve always worked on all of the films, some more than others depending on what they need, but I do kind of hop around a lot on the pictures, not necessarily even in a department usually.

Q:  What have you learned from working with Brad Burns and some of the other directors here?

TEDDY:  Well with Brad in particular I’d say, the reason he hired me from the beginning was because he liked that I could go on so many tangents, especially visually.  I could just keep coming up with things that almost had nothing to do with the movie or vague ideas to do with the movie, but they kind of inspired him in other ways to create what would eventually be the thing for the film.  And the thing he had taught me was how to stay on point and it took me forever to do this and I actually got the chance to use it while we were making this film because I could imagine just getting caught up in the special effects of the movie and the movie end up being just a big pinball machine that you could just kind of enjoy visually even if it didn’t have any point or anything.  You could watch it that way. But I think he always had sort of a razor sharp way of having all of his characters manage to stay in character and always stay on point as far as where he was driving that story.  And I’d say that’s like his greatest quality as a movie director, especially in animation there’s always great ideas around and everybody wants to put them in, every joke even if it breaks the mood you intended to do.